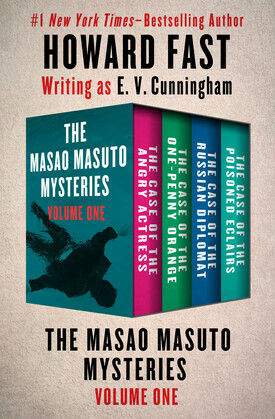 The Masao Masuto Mysteries Volume One

A collection of thrilling murder mysteries featuring “an unusually interesting detective” from the #1 New York Times–bestselling author of Spartacus (The Washington Star).

Japanese-American Beverly Hills homicide detective Masao Masuto is a karate expert, a devotee of roses, and a Zen Buddhist. He does his job with a cool, caustic wit—and with surprising force when necessary. He possesses a singular sense of justice, taking action on his own and occasionally pushing the boundaries of the law . . .

The Case of the Angry Actress: When a Hollywood mogul drops dead at his own party, Detective Masuto must dig into the darkest secrets of the magnate’s past. Now he must uncover a secret worth killing for before someone else dies.

The Case of the One-Penny Orange: Masuto has a break-in and a murder to solve, both of which are baffling. But when he suspects a connection between the two crimes, he uncovers a bizarre conspiracy that reaches back to the darkest days of World War II.

The Case of the Russian Diplomat: When a dead body is found in a pool at a high-class hotel notorious for its illicit activities, Matsuo finds himself hunting for a killer and tangled in a web of espionage and international intrigue.

The Case of the Poisoned Eclairs: A pleasant lull in murder cases is broken when a series of unusual poisoning deaths puts Masuto on the hunt for someone whose terrifying vendetta has only just begun.

“A consummate storyteller.” —The Baltimore Sun