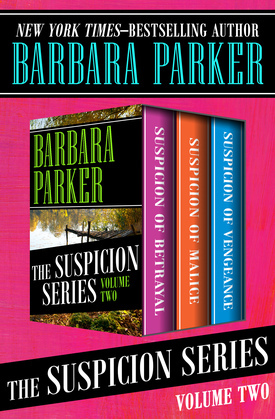 An electrifying trio of thrillers in the Edgar Award–nominated series by the New York Times–bestselling author.

Suspicion of Betrayal: Gail Connor thinks she has a booming law practice, a perfect home, and a forthcoming marriage to a top criminal lawyer. But her perfect life is threatened when menacing phone calls and threats to her young daughter uncover secrets from her past.

Suspicion of Malice: Gail and Anthony’s shaky relationship is now further divided by an explosive case. Anthony’s daughter wants Gail to defend her boyfriend against murder charges. Two things stand in Gail’s way: a reluctant witness, and the witness’s lawyer—Anthony. As a conflict of interest heats up, a young man’s life is on the line. To win, who’ll cross it?

Suspicion of Vengeance: Aiding the appeal of a man convicted of murder ten years earlier, Gail discovers plenty of justice-system malfeasance—as well as a link between the slaying and the skeletons in her own family closet.