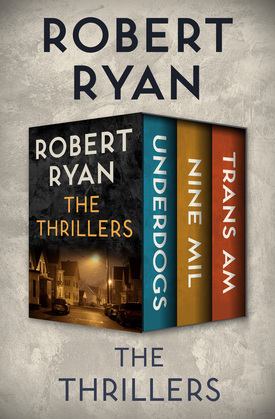 by Robert Ryan (Author)
Excerpt
Fiction Mystery & detective Suspense
warning_amber
One or more licenses for this book have been acquired by your organisation details
Three roller-coaster thrillers set in America—from a bestselling British writer.

Underdogs: Seattle burned to the ground in 1889 and a new city was built on top of the old. A century later, the original Seattle remains: empty streets, crumbling sidewalks, and pitch-black passageways, twelve feet beneath the modern metropolis. When a robbery goes horribly wrong, Hilton “Rabbit” Babcock and his eight-year-old hostage, Ali, tumble through the rotten floor of an abandoned warehouse and into the subterranean city. They are not alone. Strange, desperate characters lurk in the shadows of old Seattle, and they don’t take kindly to visitors. To bring the girl out, the Seattle PD turns to a Vietnam vet who spent his war years flushing the Viet Cong from their jungle tunnels. Is Lewis ready to face his demons and go underground again? Ali’s life might just depend on it.

“A hardboiled tour-de-force.” —The Independent on Sunday

Nine Mil: After two masked gunmen shoot up a floating casino just off the New Jersey coast, Atlantic City taxi driver Ed Behr tries to remember the last time someone took on the casinos. Ever since he got his head slammed into a prison shower faucet, Ed’s memory hasn’t been all that great. The one person Ed can’t forget, from the time before he was an ex-con cabbie, is Honey—and he can’t seem to find her anywhere. But the glimpse of another, less welcome face from the past sets Ed’s wheels spinning, and he soon has a plan to reunite his old crew for a score that will make everything right again, or put them all out of their misery forever.

“Styish, high-octane stuff, and not for the faint-hearted.” —Esquire (UK)

Trans Am: When he isn’t playing softball or coaching Little League, Jim Barry is quizzing his five-year-old on batting averages. He is such a persuasive ambassador for America’s pastime that a foreign neighbor asks him to teach his son how to play. One tragic swing of the bat later, the boy is dead and Jim’s whole world is reduced to an impossible choice: hand over his own son as a replacement, or die alongside the rest of his family. Meanwhile, on the other side of the country, a young boy is abducted and his single mother vows to do whatever it takes to bring him back. At the intersection of these two tragedies, a sinister network is exposed, and the deadly, all-consuming passion of familial bonds revealed.