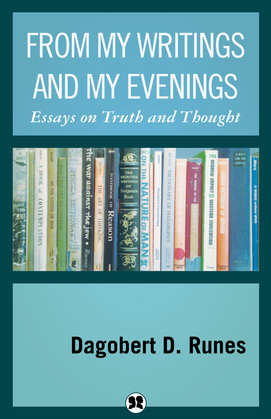 From My Writings and My Evenings

by Dagobert D. Runes (Author)
Excerpt
Nonfiction Human science Philosophy Ethics & moral philosophy Free will & determinism Essays
warning_amber
One or more licenses for this book have been acquired by your organisation details
It is late in the evening and a philosopher wants to get words on paper. No grand project. No grand system of thought, just an attempt to get some things off his chest. Where would he turn his attention? Where would his thoughts lead him? Several catch phrases become crystallization points for his thoughts: thinking, the nature of man, the art of living, God and religion, Jews and anti-Semitism, crime and punishment, education, arts and science, language and literature, history and the state.

Dagobert D. Runes put in much effort to avoid the pursuit of false ideas. In fact, the preface to From My Writings and My Evenings reads: “Hesitancy in judgment is the true mark of the thinker. Men think quite alike as they desire alike; if they were different, they could not co-exist even for a day. But most people judge by traditional or imitated judgment patterns, and snap judgments are the rule and the rulers.”

How is one to avoid the pitfalls apparent in such judgments, and still contribute to one’s personal philosophy? If you are hesitant in your judgments, then what can you state that you believe to be unquestionably true? The result is a touching document of a philosopher who investigates many areas of man’s endeavors, and who seeks to characterize what he judges to be the pure, true nature of these realms.