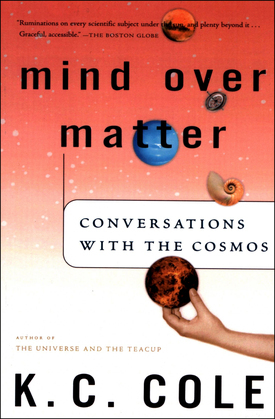 by K. C. Cole (Author)
Excerpt
Nonfiction Science and technics Science Astronomy Cosmology Astrophysics & space science Others Essays
warning_amber
One or more licenses for this book have been acquired by your organisation details
“Ruminations on every scientific subject over the sun—and plenty beyond it”—from the bestselling author of The Universe and the Teacup (The Boston Globe).

A San Jose Mercury News Best Book of the Year

A recipient of the American Institute of Physics Award for Best Science Writer, K. C. Cole offers a wide-ranging collection of essays about the nature of nature, the universals in the universe, and the messy playfulness of great science.

In witty and fresh short takes, she explores some of the world’s most intriguing scientific subjects—from particle physics to cosmology to mathematics and astronomy—and introduces a few of science’s great minds. Revealing the universe to be elegant, intriguing, and, above all, relevant to our everyday lives, this book is “an absolute delight [that] belongs on the bedside bookshelf of every science enthusiast” (San Jose Mercury News).

“Cole seeks the wondrous in the stuff we mistake for just ordinary.” —Publishers Weekly