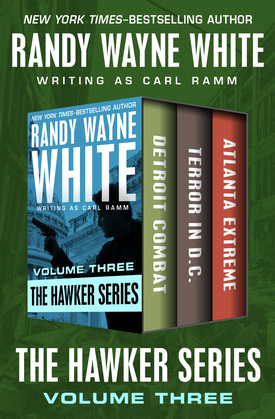 In these Hawker adventures, the New York Times–bestselling author of the Doc Ford and Hannah Smith novels once again “raises the bar of the action thriller” (The Miami Herald).

Chicago cop James Hawker had a choice: Follow orders to stand down or take out a murderous terrorist. Hawker pulled the trigger—but not before the terrorist killed two children. Now exiled from his career, Hawker won’t stop fighting for justice.

Detroit Combat: Hawker’s one-man crusade against organized crime has taken him to Detroit and the rotten-to-the-core center of the pornography industry, where a vicious gang is kidnapping women and turning them into sex slaves. Now, it’s up to America’s toughest vigilante to rescue them.

Terror in D.C.: In the last six weeks, there have been seven bombings in the nation’s capital as terrorists attempt to bring the citizens of Washington, DC, to their knees. A radical student group is behind the attacks, but Hawker is about to teach them a lesson they’ll remember till their dying day—which may come a lot sooner than they think.

Atlanta Extreme: The CIA wants Hawker dead, but an anticommunist crusader wants his help. Col. Wellington Curtis—originally from Atlanta, Georgia—has been financing and arming rebels in Central America. It seems the two men have at least one thing in common: They’re both targets. Now, in Belize, it’s up to Hawker to sort out the good guys from the bad, before somebody succeeds in putting the vigilante out of business permanently.