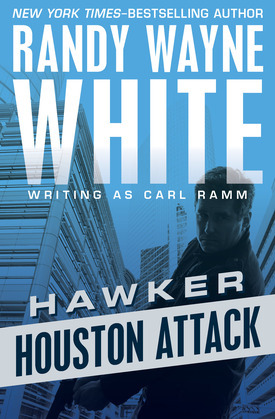 by Randy Wayne White (Author)
Excerpt
Fiction Mystery & detective Suspense
warning_amber
One or more licenses for this book have been acquired by your organisation details
From the New York Times–bestselling author of the Doc Ford series: Hawker wages a vigilante war on traffickers preying on illegal Mexican immigrants.

Disenchanted former Chicago cop James Hawker prefers justice his way: quick. He has the muscle, the experience, and the street smarts. Supported by a benefactor with the same motivations, Hawker also has the means to wash the scum off the streets in every city in the country.

As judge, jury, and executioner, America’s most dangerous vigilante now finds himself in a squalid dive bar on the Mexican side of the Rio Grande. Blind drunk and stinking of mescal, he begs a stranger to help him cross the border. Next thing Hawker knows, he’s chained up in the back of a truck with other desperate and defenseless vagrants—men and women, both—for a hundred-mile trip north to Houston. Hawker has been captured by human traffickers. And that’s exactly what he wants.

Spearheaded by a millionaire Texas rancher, the highly organized slavery ring is an insidious business profiting from Mexican labor: Sell off the vulnerable immigrants as field hands, house servants, and prostitutes. To attack the Houston slavers, Hawker must infiltrate them. But in doing so, he’s placed himself right in the line of fire.