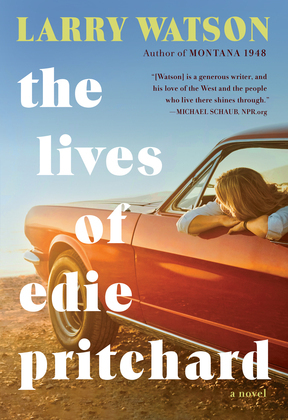 The Lives of Edie Pritchard

"Characters so real they could walk off the page, virtuoso writing and up-all-night drama."— People

From acclaimed novelist Larry Watson, a multigenerational story of the West told through the history of one woman trying to navigate life on her own terms.

Edie—smart, self‑assured, beautiful—always worked hard. She worked as a teller at a bank, she worked to save her first marriage, and later, she worked to raise her daughter even as her second marriage came apart. Really, Edie just wanted a good life, but everywhere she turned, her looks defined her. Two brothers fought over her. Her second husband became possessive and jealous. Her daughter resented her. And now, as a grandmother, Edie finds herself ha­rassed by a younger man. It’s been a lifetime of proving that she is allowed to exist in her own sphere. The Lives of Edie Pritchard tells the story of one woman just trying to be herself, even as multiple men attempt to categorize and own her.

Triumphant, engaging, and perceptive, Watson’s novel examines a woman both aware of her power and constrained by it, and probes the way perceptions of someone in a small town can shape a life through the decades.