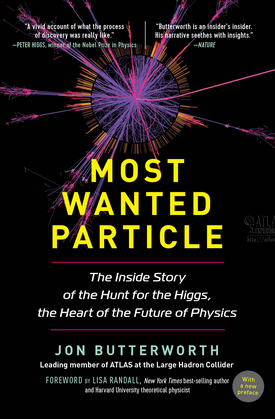 Particle physics as we know it depends on the Higgs boson: It’s the missing link between the birth of our universe—as a sea of tiny, massless particles—and the tangible world we live in today. But for more than 50 years, scientists wondered: Does it exist?

Physicist Jon Butterworth was at the frontlines of the hunt for the Higgs at CERN’s Large Hadron Collider—perhaps the most ambitious experiment in history. In Most Wanted Particle, he gives us the first inside account of that uncertain time, when an entire field hinged on a single particle, and life at the cutting edge of science meant media scrutiny, late-night pub debates, dispiriting false starts in the face of intense pressure, and countless hours at the collider itself. As Butterworth explains, our first glimpse of the elusive Higgs brings us a giant step closer to understanding the universe—and points the way to an entirely new kind of physics.

Praise for Most Wanted Particle

“Butterworth is an insider’s insider. His narrative seethes with insights on the project’s science, technology and “tribes,” as well as his personal (and often amusing) journey as a frontier physicist.” —Nature

“A vivid account of what the process of discovery was really like for an insider.” —Peter Higgs, winner of the Nobel Prize in Physics