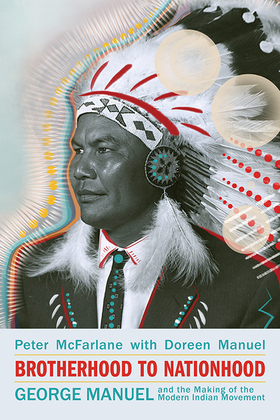 Charged with fresh material and new perspectives, this updated edition of the groundbreaking biography Brotherhood to Nationhood brings George Manuel and his fighting tradition into the present.

George Manuel (1920–1989) was the strategist and visionary behind the modern Indigenous movement in Canada. A three-time Nobel Peace Prize nominee, he laid the groundwork for what would become the Assembly of First Nations and was the founding president of the World Council of Indigenous Peoples. Authors Peter McFarlane and Doreen Manuel follow him on a riveting journey from his childhood on a Shuswap reserve through three decades of fierce and dedicated activism.

In these pages, an all-new foreword by celebrated Mi'kmaq lawyer and activist Pam Palmater is joined by an afterword from Manuel’s granddaughter, land defender Kanahus Manuel. This edition features new photos and previously untold stories of the pivotal roles that the women of the Manuel family played – and continue to play – in the battle for Indigenous rights.