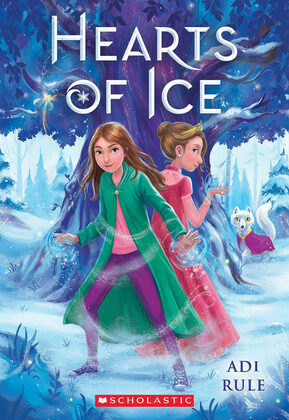 by Adi Rule (Author)
Buy for $8.99 Excerpt
Fiction Juvenile & young adult Tales Adaptations Fantasy, magic
warning_amber
One or more licenses for this book have been acquired by your organisation details

Evangeline has been lonely her whole life. Her mother rarely lets her play outside . . . especially not when it's snowing. It's almost as if she wants to hide her daughter from the world.<br /><br /><br />For as long as she can remember, Evangeline has felt someone missing, like a best friend who moved away, or an imaginary friend she's forgotten. She knows it sounds crazy, but the thought has always given her comfort-the idea that there's someone waiting for her, looking for her. Someone who cares about her.<br /><br /><br />On her birthday, Evangeline finds her window has blown open, and her room is full of snow. There's a message written in the frost. One word.<br /><br />HELP<br /><br /><br />Evangeline learns that she has a sister, a twin, in fact. They were both born in another world-a land of snow and music and ancient magic. Now, someone is calling Evangeline back, and will stop at nothing to lure her into the magical realm where danger lurks.