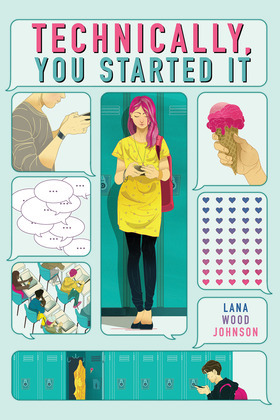 Technically, You Started It

by Lana Wood Johnson (Author)
Buy for $20.99 Excerpt
Fiction Juvenile & young adult Themes Social situations Dating & sex Romance
warning_amber
One or more licenses for this book have been acquired by your organisation details

When a guy named Martin Nathaniel Munroe II texts you, it should be obvious who you're talking to. Except there's two of them (it's a long story), and Haley thinks she's talking to the one she doesn't hate.<br /><br />A question about a class project rapidly evolves into an all-consuming conversation. Haley finds that Martin is actually willing to listen to her weird facts and unusual obsessions, and Martin feels like Haley is the first person to really see who he is. Haley and Martin might be too awkward to hang out in real life, but over text, they're becoming addicted to each other.<br /><br />There's just one problem: Haley <i>doesn't</i> know who Martin is. And Martin doesn't know that Haley doesn't know. But they better figure it out fast before their meet-cute becomes an epic meet-disaster . . .