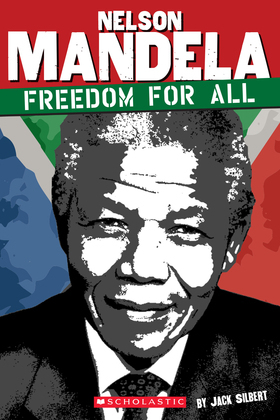 Nelson Mandela: Freedom for All

by Jack Silbert (Author)
Buy for $1.99 Excerpt
Nonfiction Juvenile Biography & autobiography Political Social activists
warning_amber
One or more licenses for this book have been acquired by your organisation details

Read all about Nelson Mandela's inspiring life--from his humble beginnings in rural South Africa to his tragic death at age 95.

In South Africa, Nelson Mandela was known as "the father of the nation," and around the world he was revered for his political and humanitarian accomplishments. NELSON MANDELA: FREEDOM FOR ALL covers the most important parts of this incredible man's life: his 26 years as a political prisoner; his receipt of the Nobel Peace Prize in 1993 for his work against apartheid; his election as the first black president of South Africa in 1994; and more! Until he left office in 1999, Mandela helped to dismantle apartheid and create a new constitution for the country. Mandela remained politically active even after his retirement. He championed humanitarian issues like fighting HIV and AIDS under the Nelson Mandela Foundation. NELSON MANDELA: FREEDOM FOR ALL is the most up-to-date account of Mandela's inspiring life story.