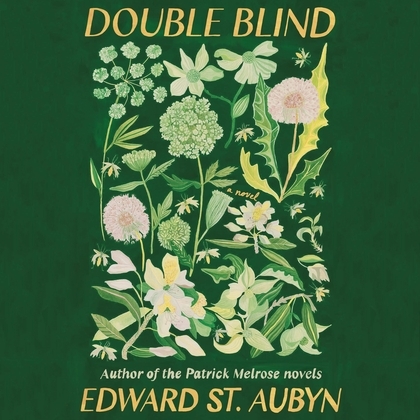 "In his remarkable performance of Edward St. Aubyn's newest novel, stage and screen actor Benedict Cumberbatch proves yet again that he is a master of pacing and characterization...When not delivering a silky, warm, and beautifully enunciated narration, Cumberbatch subsumes himself into a multiplicity of male and female roles." -- AudioFile Magazine, Earphones Award winner

Double Blind follows three close friends and their circle through a year of extraordinary transformation. Set between London, Cap d'Antibes, Big Sur, and a rewilded corner of Sussex, this thrilling, ambitious novel is about the headlong pursuit of knowledge—for the purposes of pleasure, revelation, money, sanity, or survival—and the consequences of fleeing from what we know about others and ourselves.

When Olivia meets a new lover just as she is welcoming her best friend, Lucy, back from New York, her dedicated academic life expands precipitously. Her connection to Francis, a committed naturalist living off the grid, is immediate and startling. Eager to involve Lucy in her joy, Olivia introduces the two—but Lucy has received shocking news of her own that binds the trio unusually close. Over the months that follow, Lucy’s boss, Hunter, Olivia’s psychoanalyst parents, and a young man named Sebastian are pulled into the friends’ orbit, and not one of them will emerge unchanged.

Expansive, playful, and compassionate, Edward St. Aubyn's Double Blind investigates themes of inheritance, determinism, freedom, consciousness, and the stories we tell about ourselves. St. Aubyn's major new novel is as compelling about ecology, psychoanalysis, genetics, and neuroscience as it is about love, fear, and courage. Most of all, it is a perfect expression of the interconnections it sets out to examine, and a moving evocation of an imagined world that is deeply intelligent, often tender, curious, and very much alive.

Academy Award Nominee Benedict Cumberbatch is known for playing Sherlock Holmes in Sherlock, a role that has earned him international acclaim and several awards, including a Primetime Emmy. In 2015, Benedict portrayed Alan Turing in the multi-award-winning film The Imitation Game, which earned him a BAFTA, Golden Globe, and Academy Award nomination as Best Actor. Benedict joined the Marvel Universe as the titular character in 2016’s Doctor Strange, a role he reprised in Avengers: Infinity War and Avengers: Endgame. More recently, Benedict’s performance in David Nicholls’s adaptation of Edward St. Aubyn’s beloved Patrick Melrose has earned him a BAFTA for Best Actor and Emmy and Golden Globe Best Actor nominations.