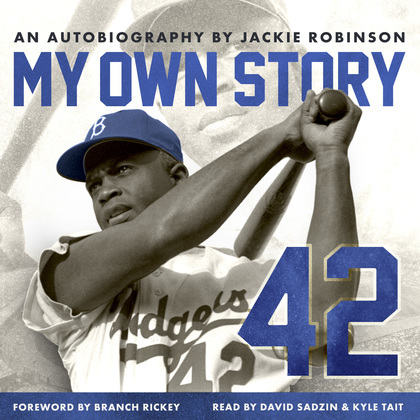 by Jackie Robinson (Author), David Sadzin (Narrateur)
Excerpt
Nonfiction Biography & autobiography Sports
warning_amber
One or more licenses for this book have been acquired by your organisation details

The extraordinary memoir from baseball icon Jackie Robinson—originally published in 1948, just a year after he shattered baseball’s color barrier, and now released as an audiobook for the very first time.

“I’m not concerned with your liking or disliking me…all I ask is that you respect me as a human being.”

So says #42, who comes alive to share his story, up to and through that historic first season, as told to famed sportswriter Wendell Smith, with a foreword by Brooklyn Dodgers General Manager Branch Rickey.

Travel back in time, as the Dodgers legend guides you through his athletic upbringing, his short stint with the Kansas City Monarchs of the Negro Leagues, and his breakthrough to the big leagues, at the age of twenty-eight.