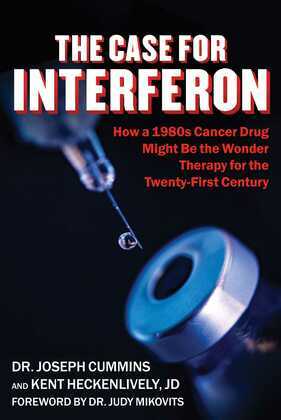 Touted as a potential breakthrough cancer therapy in the 1980s by the scientific community and publications such as TIME and Newsweek magazine, the reputation of interferon has not lived up to its early promise. Interferons are small proteins with anti-viral and anti-cancer effects, which have the power to modulate the functioning of the immune system.

But Dr. Joseph Cummins, an early interferon pioneer, holder of sixteen US medical patents, author of more than sixty scientific publications, as well as having taught veterinary medicine at the University of Missouri, University of Illinois, and Texas A & M University, argues that the current thinking on interferon is fundamentally flawed.

Interferon is created in small quantities in the body in response to infection, and seems to work best at these low dosages. However, the public health cowboys, working under the assumption that anything good in tiny amounts must be better in massive amounts, pursued exactly the wrong strategy. High-dose interferon does not work in the body and may even cause problems.

The first remarkable results for interferon and the flu were reported by the Soviets in the 1970s, but Western medicine discounted these findings because they believed the dosages were so low they couldn’t possibly be effective. In the 1980s, when interferon was expensive to produce and only small quantities could be manufactured, the results were remarkable.

Dr. Cummins was an early pioneer of low-dose interferon, and his remarkable findings among animals led to collaborations with medical doctors for human trials, even going so far as Africa at the height of the HIV-AIDS epidemic. Cummins reviews the evidence for this inexpensive, safe treatment and makes an eloquent argument for medical science to take another look at interferon to tackle today’s most challenging health conditions, including COVID-19.