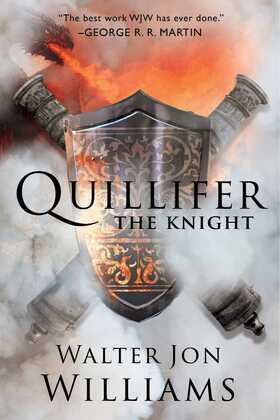 “Williams knows exactly what to do with Quillifer, and it's hugely entertaining.” ?Locus

“Walter Jon Williams is always fun, but this may be his best yet, a delight from start to finish, witty, colorful, exciting and amusing by turns, exquisitely written.” ?George R. R. Martin

“Chock full of derring-do, blood and thunder, swashbuckling, and other good stuff evocative of Rafael Sabatini, Sir Walter Scott, and the penny-bloods.” ?Paul Di Filippo, author of The Big Get-Even

Quillifer?now a member of the nobility?finds himself further immersed in court politics as the outcast princess Floria is suddenly in a position of power with a rebellion stoked by a certain brilliant tactician, in this thrilling sequel to Quillifer.

The ambitious young Quillifer was been knighted for services to the crown, but was then banished from court by a queen who finds him obnoxious. Now, after a two-year voyage to improve his fortunes, Quillifer returns to court and is plunged immediately into a maelstrom of intrigue that triggers duels, plots, amours, and rollicking adventure. Bounding back and forth from the high councils of state to the warm bed of his mistress, Quillifer must exert every ounce of seductive charm and low cunning in order to survive.

Queen Berlauda’s foreign husband brings war in his wake, along with a clutch of officials who enforce the royal will with violence, torture, and judicial murder. A dragon menaces the realm, and political conspiracy threatens the life of Quillifer’s young patroness, Princess Floria. It’s the traditional job of a knight to fight dragons and rescue princesses, but Quillifer is hardly a traditional knight, and he brings to the job an array of unorthodox skills that dazzles his swarm of rivals, seduces their wives, and threatens the realm.

But there’s a greater menace to Quillifer than deadly political intrigue, for once again he finds himself hunted by the cruel, beautiful, and vengeful goddess Orlanda.