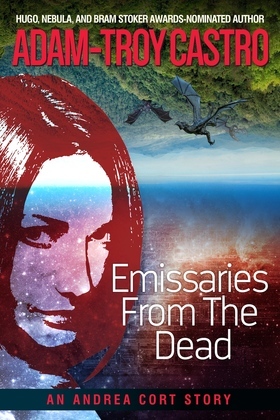 Emissaries from the Dead

“As great as I’d hoped…Andrea Cort and her universe have terrific scope for future development.” —i09

The place is One One One, a gigantic enclosed space station constructed by the AIsource, a mysterious software collective that may be the most advanced, most powerful creatures in the known universe. They have seeded the world with creatures of their own devising, and invited a delegation of human beings to observe. But now the little research community has been rocked by murder…and it appears that the AIsource may be playing a deeper game.

Enter Andrea Cort. Prosecutor. War Criminal. Misanthrope. Genius. She has been sent to get to the bottom of these heinous crimes. But she is facing enemies both human and more than human…and the solution to the mystery just might change her very relationship to the world she knows…

Praise for Emissaries from the Dead

“A brilliantly executed novel, fully successful as both science fiction and murder mystery. Indeed, it evidences a writer at the peak of his career, and it shows none of the flaws one expects from first novels… Emissaries from the Dead is one of the best science fiction novels of the year so far, and it can be recommended especially to fans of science fiction mysteries.” —SciFi Weekly

“A uniquely absorbing read. It envelops you in a truly exotic and alien environment, and gives you a heroine to root for… It offers mystery, action, a few good jolts, and a bit of the old redemption sans mawkishness. All of the ingredients for a story sure to knock ’em dead.” —SF Reviews

“Adam-Troy Castro’s Emissaries from the Dead is SF at its best: Silence of the Lambs as Larry Niven might have written it. A clever, thought-provoking page-turner. Bravo!” —Robert J. Sawyer, Hugo Award-winning author of Rollback

“Adam-Troy Castro has given us the ultimate high-wire thriller.” —Jack McDevitt