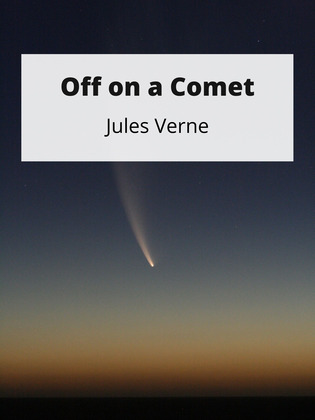 Off on a Comet

The story starts with a comet called Gallia, that touches the Earth in its flight and collects a few small chunks of it. The disaster occurs on January 1 of the year 188x in the area around Gibraltar. On the territory that is carried away by the comet there remain a total of thirty-six people of French, English, Spanish and Russian nationality. These people do not realize at first what has happened, and consider the collision an earthquake.

They first notice weight loss: Captain Servadac's adjutant Ben Zoof, to his amazement, jumps twelve meters high. Zoof with Servadac also soon notice that the alternation of day and night is shortened to six hours, that east and west have changed sides, and that water begins to boil at 66 degrees Celsius, from which they rightly deduce that the atmosphere became thinner and pressure dropped. At the beginning of their stay in Gallia they notice the Earth with the Moon, but think it is an unknown planet. Other important information is obtained through their research expedition with a ship, which the comet also took.

During the voyage they discover a mountain chain blocking the sea, which they initially consider to be the Mediterranean Sea and then they find the island of Formentera (before the catastrophe a part of the Balearic Islands), where they find French astronomer Palmyrin Rosette, who helps them to solve all the mysterious phenomena. They are all on a comet which Rosette discovered by a year ago and predicted to be on a collision course with Earth, but no one believed the astronomer, because a layer of thick fog at the time prevented astronomical observations in other places.

A new research expedition determines the circumference of Gallia to be 2320 km. The mass of the comet is calculated by Rosette. He determines it at 209,346 billion tonnes. For the calculation he uses spring scales and forty 5-franc silver coins, the weight of which on earth equaled exactly one kilogram. However, the owner of the scales, Isaac Hakkabut, has rigged the instrument, so the results have to be cut by a quarter.

The involuntary travelers through the Solar system do not have any hope for long-term colonization of their new world, because it is lacking arable land. They feed themselves mainly with the animals that were left on the chunk carried away by Gallia. One strange phenomenon they meet is that the sea on the comet does not freeze, even though the temperature drops below the freezing point (believed to be due to the theory that a stagnant water surface resists freezing longer than when rippled by wind). Once a stone is thrown into the sea, the sea freezes in a few moments. The ice is completely smooth and allows skating and sleigh sailing.

Despite the dire situation in which the castaways find themselves, old power disputes from Earth continue on Gallia, because the French and English officers consider themselves the representatives of their respective governments. The object of their interest is for example previously Spanish Ceuta, which has become an island on the comet and which both parties start to consider an unclaimed territory. Captain Servadac therefore attempts to occupy Ceuta, without success. It turns out that the island has been occupied by Englishmen, who maintain a connection to their base at Gibraltar through an optical telegraph.

Gallia gets to an extreme point of its orbit and begins its return to Earth. In early November Rossete's refined calculations show that there will be a new collision with the Earth, exactly two years after the first, again on January 1. Therefore, the idea is conceived of leaving the comet at collision time in a balloon. The proposal is approved and the castaways make a balloon out of the sails of their ship. In mid-December there is an earthquake, in which Gallia partially falls apart and loses a fragment, which probably kills all Englishmen in Ceuta and Gibraltar. When on January 1 there is again a contact between the atmospheres of Gallia and Earth, the space castaways leave in the balloon and land safely two kilometers from Mostaganem in Algeria. (Source: Wikipedia)