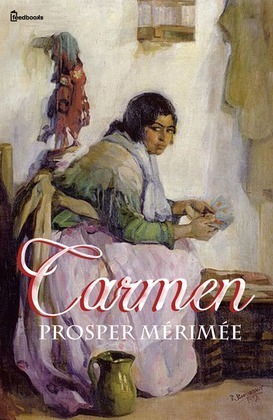 Carmen is a novella by Prosper Mérimée, written & 1st published in 1845. It has been adapted into a number of dramatic works, including the famous opera by Georges Bizet. According to a letter Mérimée wrote to the Countess of Montijo, Carmen was inspired by a story she told him on his visit to Spain in 1830. He said, "It was about that ruffian from Málaga who had killed his mistress, who consecrated herself exclusively to the public...As I have been studying the Gypsies for some time, I have made my heroine a Gypsy." An important source for the material on the Romani people (Gypsies) was George Borrow's book The Zincali (1841). Another source may have been the narrative poem The Gypsies (1824) by Alexander Pushkin, which Mérimée would later translate into French prose (Briggs 2008). The novella comprises four parts. Only the 1st three appeared in the original publication in the 10/1/1845 issue of the Revue des Deux Mondes (Robinson 1992); the 4th 1st appeared in the book publication in 1846. Mérimée tells the story as if it had really happened to him on his trip to Spain in 1830.