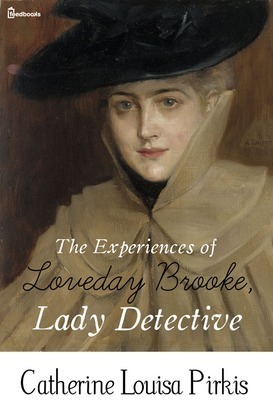 What is a young lady like Loveday Brooke doing in a private detective agency? She's working there, as a clever sleuth, a female Sherlock Holmes of sorts. Excerpts:

"Loveday Brooke, at this period of her career, was a little over thirty years of age, and could be best described in a series of negations.

"She was not tall, she was not short; she was not dark, she was not fair; she was neither handsome nor ugly. Her features were altogether nondescript; her one noticeable trait was a habit she had, when absorbed in thought, of dropping her eyelids over her eyes till only a line of eyeball showed, and she appeared to be looking out at the world through a slit, instead of through a window. Her dress was invariably black, and was almost Quaker-like in its neat primness."

But what one could say affirmatively about her was that Loveday Brooke was a naturally talented private detective, a chosen career that had cut her off sharply from her former associates and her position in society. She demonstrates her skills in these six short stories:

The Black Bag Left on a Door-Step,

The Murder at Troyte's Hill,

The Ghost of Fountain Lane,