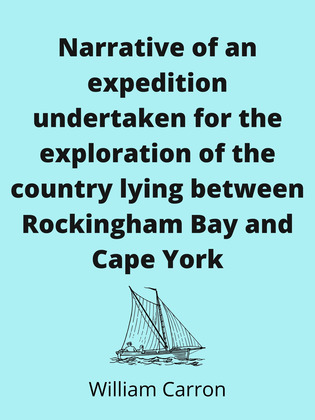 The account of Kennedy's disastrous expedition to explore Cape York in 1848, '... the most tragic of all Australian explorations, not least because he and his men were defeated at the outset. The bravery, skill, good humour and generosity of Kennedy, the loyalty and bravery of Jackey-Jackey, the endurance of Carron and Goddard all tell of the needless suffering and tragic waste of human life brought about by the ill-conceived, even impossible, instructions they had been given' (Wantrup). Deposited at Rockingham Bay, the party struggled to make progress through dense swamps and rainforest. After a month Kennedy split the party, leaving eight men at Weymouth Bay under the command of William Carron, the expedition botanist, and set off for Cape York with his local guide Jackey-Jackey and three others. One by one the members of the expedition died by misadventure or at the hands of the local Aboriginal people. After Kennedy was speared, Jackey-Jackey managed to reach Port Albany and was rescued by the 'Ariel'; his important first-hand account of the fate of the advance party constitutes the first appendix to this volume. Back at Weymouth Bay, threatened by the local population, Carron kept a journal as his party died one by one of starvation, until only he and Goddard remained; the last poignant pages of his account are based on this journal. (Source: Michael Treloar)