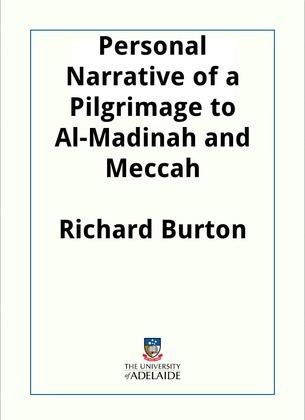 Personal Narrative of a Pilgrimage to Al-Madinah and Meccah

"Sir Richard Francis Burton KCMG FRGS (1821-1890) was a British explorer, geographer, translator, writer, soldier, orientalist, cartographer, ethnologist, spy, linguist, poet, fencer, and diplomat. He was famed for his travels and explorations in Asia, Africa and America, as well as for his extraordinary knowledge of languages (purportedly he spoke 29 European, Asian and African languages) and cultures. His best known achievements include: a well-documented journey to Mecca in disguise at a time when Europeans were forbidden access on pain of death; an unexpurgated translation of One Thousand and One Nights (commonly called The Arabian Nights); the publication of the Kama Sutra in English; a translation of The Perfumed Garden (the Arab Kama Sutra); and his journey with John Hanning Speke as the first Europeans to visit the Great Lakes of Africa in search of the source of the Nile. Personal Narrative of a Pilgrimage to Al-Madinah and Meccah (1855) describes the 1853 journey to make a Hajj (pilgrimage to Mecca) which was to make Burton famous, detailing the laborious preparation and disguises he employed to avoid detection as a European which would have meant certain death, and the dangers encountered en route, including his caravan's attack by bandits. Reprinted from the Memorial Edition of 1893 which includes a preface by his widow, Lady Isabel Burton." (Goodreads)