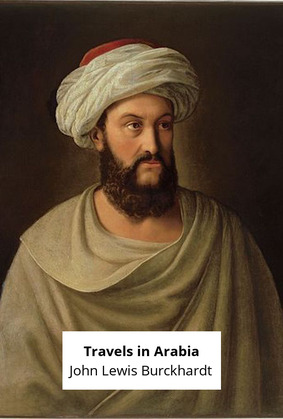 John Lewis Burckhardt (born Johann Ludwig Burckhardt and also known as Jean Louis Burckhardt) was a Swiss traveler and geographer. He was born in Lausanne, Switzerland in 1784 and died of dysentery in Cairo, Egypt in 1817, at the age of 32. His travels were sponsored by the African Association of London; his goal was to discover the headwaters of the Niger River and the location of Timbuktu, the “Lost City of Gold”. For his own protection Burckhardt assumed the identity of an Arab, “Sheikh Ibrahim Ibn Abdallah” during his travels in the Middle East. He is best known for rediscovering the ruins of the ancient city of Petra in Jordan. While primarily an account of his travels throughout the Arabian Peninsula, Travels in Arabia also describes the inhabitants, government, climate and diseases of Mecca and Medina in the early 19th century. Burckhardt's voluminous journals and letters were published posthumously by the African Association. (Source: Wikimedia, book)