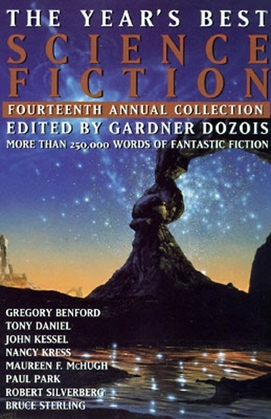 From Cyberspace to outer space, from the Dark Continent to the speed of light, the dozens of stories in this terrific collection represent the year's finest offerings in imaginative fiction.

Among the twenty-eight tales assembled here are:
The Land of Nod, Mike Resnick's powerful tale of the orbital space colony Kirinyaga and how the old ways conflict with the new.
Foreign Devils, Walter Jon Williams's exotic revision of the War of the Worlds Martian Invasion.
Red Sonja and Lessingham in Dreamland, Gwyneth Jones's unpredictable venture into the frightening territory of on-line romance.
Death Do Us Part, Robert Silverberg's masterful tale of love in the future.

Rounding out the volume are a long list of Honorable Mentions and Gardner Dozois's comprehensive survey of the year in science fiction.

In all, the stories assembled here will take you as far as technology, imagination, and hope can go. Climb aboard.