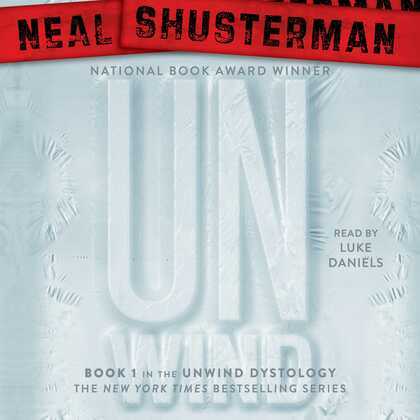 Three teens fight for their lives and each other in this breathtakingly suspenseful first book in the twisted, New York Times bestselling Unwind Dystology series by Neal Shusterman.

After America’s Second Civil War, the Pro-Choice and Pro-Life armies came to an agreement. According to their Bill of Life, human life may not be terminated from the moment of conception until the age of thirteen. But between the ages of thirteen and eighteen, the child may be gotten rid of by their parent through a process called “unwinding.”

By repurposing a teen’s organs and other body parts in living recipients, the unwound child’s life doesn’t technically end. According to society’s leaders, unwinding leads to a healthier and safer community, as troublesome and unwanted teens are used for the greater good.

Curtis is a rebel whose unwinding was ordered by his parents. Rita, a ward of the state, has been slated for unwinding due to cost cutting. And Lev, his parents’ tenth child, has been destined for unwinding since birth as a religious tithe. As their paths intersect, they start to fight for their own destinies. But do they stand a chance of escaping their fate or proving their lives are worth saving?