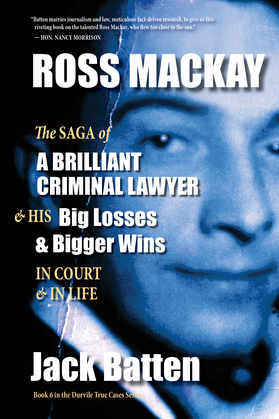 Ross Mackay, The Saga of a Brilliant Criminal Lawyer

by Batten Jack (Author)
Buy for $11.99 Excerpt
Nonfiction Biography & autobiography Lawyers & judges
warning_amber
One or more licenses for this book have been acquired by your organisation details

The two murder trials held in Toronto in the spring of 1962 only nineteen days apart made Canadian social and legal history. The accused man in each trial, one a pimp who stabbed to death a fellow pimp, the other a thief who killed a policeman in a shootout, were the last two men to be hanged in Canada. In personal terms, for a Toronto criminal lawyer named Ross Mackay, the trials represented just two more episodes in a tumultuous life story. Mackay was the counsel for the accused in both trials, a mere thirty years old when he lost two clients to the gallows. But the trials were far from the last times that Mackay defended accused murderers in the most horrendous circumstances. It’s the story of Mackay’s dedication to the maxim that every man is entitled to a defence that Jack Batten tells in this book, a story that emerges in all its colour, drama and tragedy, a story of Mackay’s courage and the harsh penalties he paid for the often daring and controversial choices he made in life and in the courtroom.