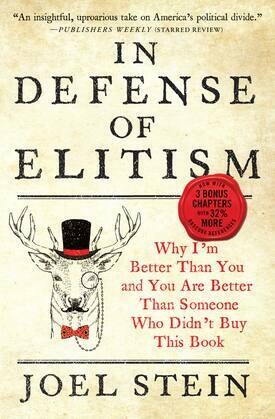 In Defense of Elitism

by Joel Stein (Author)
Excerpt
Nonfiction Humor Topic Political Adult
warning_amber
One or more licenses for this book have been acquired by your organisation details
From Thurber finalist and former star Time columnist Joel Stein comes a "brilliant exploration" (Walter Isaacson) of America's political culture war and a hilarious call to arms for the elite.

"I can think of no one more suited to defend elitism than Stein, a funny man with hands as delicate as a baby full of soft-boiled eggs." —Jimmy Kimmel, host of Jimmy Kimmel Live!

The night Donald Trump won the presidency, our author Joel Stein, Thurber Prize finalist and former staff writer for Time Magazine, instantly knew why. The main reason wasn't economic anxiety or racism. It was that he was anti-elitist. Hillary Clinton represented Wall Street, academics, policy papers, Davos, international treaties and the people who think they're better than you. People like Joel Stein. Trump represented something far more appealing, which was beating up people like Joel Stein.

In a full-throated defense of academia, the mainstream press, medium-rare steak, and civility, Joel Stein fights against populism. He fears a new tribal elite is coming to replace him, one that will fend off expertise of all kinds and send the country hurtling backward to a time of wars, economic stagnation and the well-done steaks doused with ketchup that Trump eats.

To find out how this shift happened and what can be done, Stein spends a week in Roberts County, Texas, which had the highest percentage of Trump voters in the country. He goes to the home of Trump-loving Dilbert cartoonist Scott Adams; meets people who create fake news; and finds the new elitist organizations merging both right and left to fight the populists. All the while using the biggest words he knows.
Protection
DRM Protected
Format
EPUB
Publication date
October 22, 2019
Publisher
Grand Central Publishing
ISBN
9781455569472
Paper ISBN
9781455591473
File size
2 MB