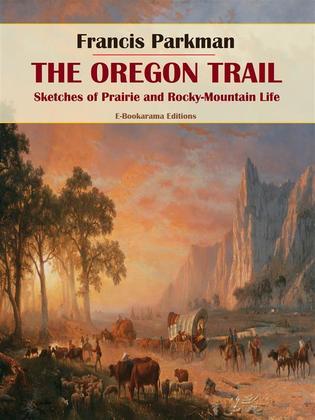 On April 28, 1846, Francis Parkman, who had already decided that he was going to write the history of the settling of America, and Quincy Adams Shaw set forth from St. Louis up the Missouri River and onto the Oregon Trail for a "tour of curiosity and amusement to the Rocky Mountains."  They travelled some 1700 miles, meeting trappers, gamblers, woodsmen, soldiers and Indians and Parkman eventually spent three weeks hunting buffalo with a band of Oglala Sioux.  The following year he published "The Oregon Trail", a travelogue which remains one of the great books ever produced by an American and embarked him on a career as one of America's first great historians.

In "The Oregon Trail" keen observations and a graphic style characterize the author's remarkable record of a vanishing frontier. Detailed accounts of the hardships experienced while traveling across mountains and prairies; vibrant portraits of emigrants and Western wildlife; and vivid descriptions of Indian life and culture.

A classic of American frontier literature.