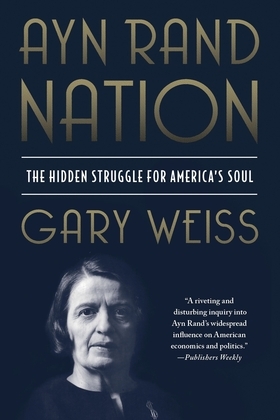 In Ayn Rand Nation, Gary Weiss explores the people and institutions that remain under the spell of the Russian-born novelist. He provides new insights into Rand's inner circle in the last years of her life, with revelations of never-before-publicized predictions by Rand that still resonate today. Weiss charts Rand's infiltration of the Tea Party and Libertarian movements, and provides an inside look at the radical belief system that has exerted a powerful influence on the Republican Party and its presidential candidates. It's a fascinating cast of characters that ranges from Glenn Beck to Oliver Stone, and includes Rand's most influential disciple, Alan Greenspan. Weiss describes in penetrating detail how Greenspan became a stalking horse for Rand?slashing and burning regulations with ideological zeal, and then seeking to conceal her influence on his life and thinking. Lastly, Weiss provides a strategy for a renewed national dialogue, an embrace of the nation's core values that is needed to deal with Rand's pervasive grip on society.
From The Fountainhead and Atlas Shrugged to Rand's lesser-known and misunderstood nonfiction books, Gary Weiss examines the impact of Rand's thinking across our society.