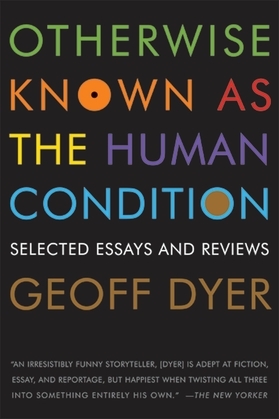 Otherwise Known as the Human Condition

Geoff Dyer has earned the devotion of passionate fans on both sides of the Atlantic through his wildly inventive, romantic novels as well as several brilliant, uncategorizable works of nonfiction. All the while he has been writing some of the wittiest, most incisive criticism we have on an astonishing array of subjects?music, literature, photography, and travel journalism?that, in Dyer's expert hands, becomes a kind of irresistible self-reportage.

Otherwise Known as the Human Condition collects twenty-five years of essays, reviews, and misadventures. Here he is pursuing the shadow of Camus in Algeria and remembering life on the dole in Brixton in the 1980s; reflecting on Richard Avedon and Ruth Orkin, on the status of jazz and the wonderous Nusrat Fateh Ali Khan, on the sculptor ZadKine and the saxophonist David Murray (in the same essay), on his heroes Rebecca West and Ryszard Kapus´cin´ski, on haute couture and sex in hotels. Whatever he writes about, his responses never fail to surprise. For Dyer there is no division between the reflective work of the critic and the novelist's commitment to lived experience: they are mutually illuminating ways to sharpen our perceptions. His is the rare body of work that manages to both frame our world and enlarge it.