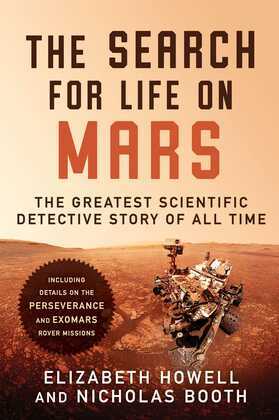 The Search for Life on Mars

With a focus of the Perseverance rover mission, here is the  "Quintessential account of one of humanity’s most intriguing quests" (Pail Halpern, Medium), "A remarkable, timely, and up-to-date account of Mars exploration" (Leonard David, "Space Insider," Space.com).

From The War of the Worlds to The Martian and to the amazing photographs sent back by the robotic rovers Curiosity and Opportunity, Mars has excited our imaginations as the most likely other habitat for life in the solar system. Now the Red Planet is coming under scrutiny as never before. As new missions are scheduled to launch this year from the United States and China, and with the European Space Agency's ExoMars mission now scheduled for 2022, this book recounts in full the greatest scientific detective story ever.

For the first time in forty years, the missions heading to Mars will look for signs of ancient life on the world next door. It is the latest chapter in an age?old quest that encompasses myth, false starts, red herrings, and bizarre coincidences—as well as triumphs and heartbreaking failures. This book, by two journalists with deep experience covering space exploration, is the definitive story of how life's discovery has eluded us to date, and how it will be found somewhere and sometime this century. The Search for Life on Mars is based on more than a hundred interviews with experts at NASA’s Jet Propulsion Laboratory and elsewhere, who share their insights and stories. While it looks back to the early Mars missions such as Viking 1 and 2, the book's focus is on the experiments and revelations from the most recent ones—including Curiosity, which continues to explore potentially habitable sites where water was once present, and the Mars Insight lander, which has recorded more than 450 marsquakes since its deployment in late 2018—as well as on the Perseverance and ExoMars rover missions ahead.

And the book looks forward to the newest, most exciting frontier of all: the day, not too far away, when humans will land, make the Red Planet their home, and look for life directly.