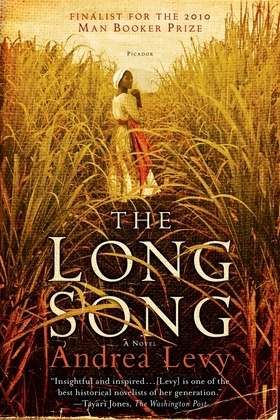 Small Island introduced Andrea Levy to America and was acclaimed as "a triumph" (San Francisco Chronicle). It won both the Orange Prize and the Whitbread Book of the Year Award, and has sold over a million copies worldwide. With The Long Song, Levy once again reinvents the historical novel.

Told in the irresistibly willful and intimate voice of Miss July, with some editorial assistance from her son, Thomas, The Long Song is at once defiant, funny, and shocking. The child of a field slave on the Amity sugar plantation, July lives with her mother until Mrs. Caroline Mortimer, a recently transplanted English widow, decides to move her into the great house and rename her "Marguerite."

Resourceful and mischievous, July soon becomes indispensable to her mistress. Together they live through the bloody Baptist war, followed by the violent and chaotic end of slavery. Taught to read and write so that she can help her mistress run the business, July remains bound to the plantation despite her "freedom." It is the arrival of a young English overseer, Robert Goodwin, that will dramatically change life in the great house for both July and her mistress. Prompted and provoked by her son's persistent questioning, July's resilience and heartbreak are gradually revealed in this extraordinarily powerful story of slavery, revolution, freedom, and love.