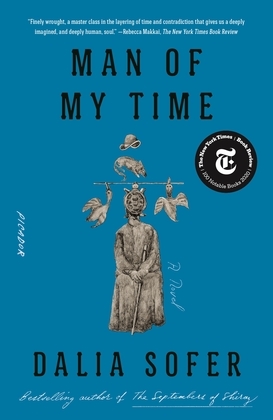 Man of My Time

"Finely wrought, a master class in the layering of time and contradiction that gives us a deeply imagined, and deeply human, soul." --Rebecca Makkai, The New York Times Book Review

"A brilliant, gripping account of countries, politics, and the long reach of history . . . This book could not have arrived at a more urgent time." --Saïd Sayrafiezadeh, author of Brief Encounters With the Enemy

From the bestselling author of The Septembers of Shiraz, the story of an Iranian man reckoning with his capacity for love and evil

Set in Iran and New York City, Man of My Time tells the story of Hamid Mozaffarian, who is as alienated from himself as he is from the world around him. After decades of ambivalent work as an interrogator with the Iranian regime, Hamid travels on a diplomatic mission to New York, where he encounters his estranged family and retrieves the ashes of his father, whose dying wish was to be buried in Iran.

Tucked in his pocket throughout the trip, the ashes propel him into a first-person excavation--full of mordant wit and bitter memory--of a lifetime of betrayal, and prompt him to trace his own evolution from a perceptive boy in love with marbles to a man who, on seeing his own reflection, is startled to encounter someone he no longer recognizes. As he reconnects with his brother and others living in exile, Hamid is forced to reckon with his past, with the insidious nature of violence, and with his entrenchment in a system that for decades ensnared him.

Politically complex and emotionally compelling, Man of My Time explores variations of loss--of people, places, ideals, time, and self. This is a novel not only about family and memory but about the interdependence of captor and captive, of citizen and country, of an individual and his or her heritage. With sensitivity and strength, Dalia Sofer conjures the interior lives of the "generation that had borne and inflicted what could not be undone."