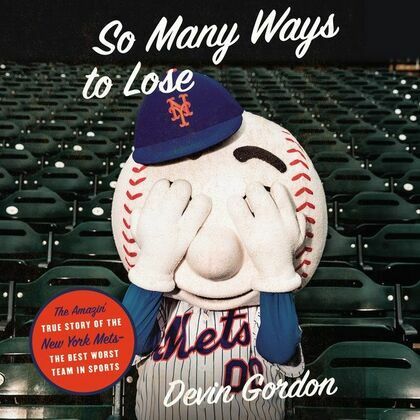 So Many Ways to Lose

A seasoned journalist and editor offers a humorously provocative look at the ?best worst team? in professional sports, the New York Mets.

There is a difference between being bad and being gifted at losing, and this distinction holds the key to understanding the true magic of the New York Mets.

Plenty of teams have longer and stronger records of championship futility than the Mets?after all, since their inception in 1962, they?ve reached the World Series five times and won twice, in 1969 and 1986. But when it comes to losing in spectacular fashion?when they?re dead from day one or they?re one base hit from the World Series?no one?s ever done it better. That?s why the New York Mets are the best worst team in sports, their true secret ingredient, the thing that distinguishes the Mets from all the so-called bad teams who stink without charm or interruption. Mets fans are capable of a bottomless optimism even when it?s at odds with all available evidence. Every spring with the arrival of Opening Day, we keep coming back, convinced that this year will be our year.

Sometimes it is. It?s probably not.

In So Many Ways to Lose, Devin Gordon takes a clear-headed, fascinating look at the Mets to understand how one team above all others has perfected the art of losing?yet remains beloved by millions. Each chapter tells the story of the franchise?s history through the prism of the Mets? singular gift. This version of the Mets? history isn?t about the miraculous ?69 team or the dominant ?86 team?it?s about what happened next.