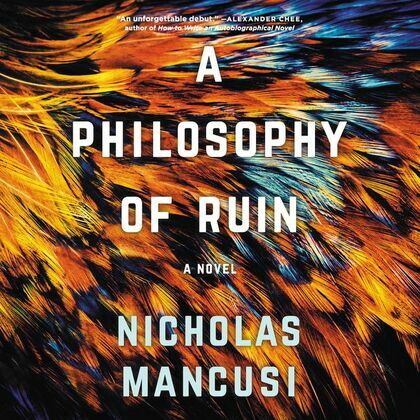 A Philosophy of Ruin

?An unforgettable debut. Mancusi is a writer to watch.??Alexander Chee, author of How to Write an Autobiographical Novel

A Vol. 1 Brooklyn Book of the Month

A LitHub Most Anticipated Book of Summer

An InsideHook Best Book of the Month

A young philosophy professor finds himself in the middle of a drug-running operation after his personal life derails in this taut, white-knuckle debut for fans of Breaking Bad

Oscar Boatwright, a disenchanted philosophy professor, receives terrible news. His mother, on her way home from Hawaii with Oscar?s father, has died midflight, her body cooling for hours until the plane can land.

Deeply grieving, Oscar feels his life slipping out of his control. A seemingly innocuous one-night stand with a woman named Dawn becomes volatile when, on the first day of classes, he realizes she is his student, and later learns that she is a fledgling campus drug lord. To make matters worse, his family is in debt, having lost their modest savings to a self-help guru who had indoctrinated Oscar?s mother by preying on her depression. Desperate to help his family, Oscar breaks with his academic personality?he agrees to help Dawn with a drug run.

A Philosophy of Ruin rumbles with brooding nihilism, then it cracks like a whip, hurtling Oscar and Dawn toward a terrifying threat on the road. Can Oscar halt the acceleration of chaos? Or was his fate never in his control? Taut, ferocious and blazingly intelligent, A Philosophy of Ruin is a heart-pounding thrill ride into the darkest corners of human geography, and a philosophical reckoning with the forces that determine our destiny.