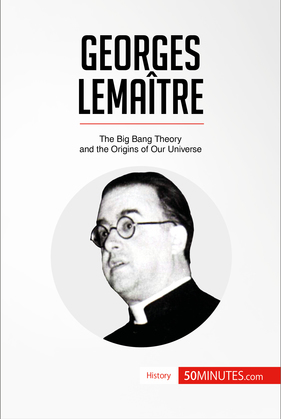 Keen to learn but short on time? Get to grips with the life of Georges Lemaître in next to no time with this concise guide.

50Minutes.com provides a clear and engaging analysis of the work of Georges Lemaître. An unlikely combination of a priest and a physicist who was responsible for the theories of the expansion of the universe and the primeval atom, which today we accept and know collectively as the Big Bang theory, Lemaître was not widely credited or recognised for his theories when he first developed them. It was not until the accidental discovery of cosmic radiation many years later that the scientific community finally came to accept this man and his ideas.

In just 50 minutes you will:
•Understand Georges Lemaître’s theories of the expansion of the universe and of the primeval atom, now known as the Big Bang theory
•Find out about his life and determination to reconcile his Catholic faith with his interest in physics
•Learn about the accidental discoveries that eventually led to the confirmation of his theories

ABOUT 50MINUTES.COM | History & Culture
50MINUTES.COM will enable you to quickly understand the main events, people, conflicts and discoveries from world history that have shaped the world we live in today. Our publications present the key information on a wide variety of topics in a quick and accessible way that is guaranteed to save you time on your journey of discovery.