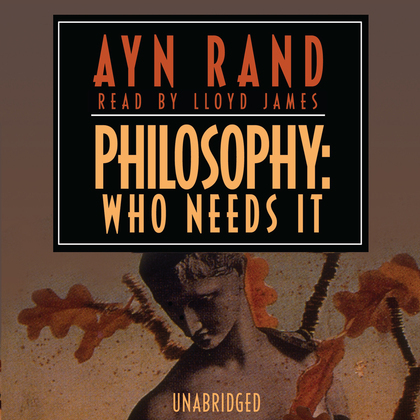 Philosophy: Who Needs It

by Ayn Rand (Author), Lloyd James (Narrateur)
Excerpt
Nonfiction Human science Philosophy Essays
warning_amber
One or more licenses for this book have been acquired by your organisation details

This collection of essays was the last work planned by Ayn Rand before her death in 1982. In it, she summarizes her view of philosophy and deals with a broad spectrum of topics. According to Ayn Rand, the choice we make is not whether to have a philosophy but which one to have: a rational, conscious, and therefore practical one, or a contradictory, unidentified, and ultimately lethal one.

Written with all the clarity and eloquence that have placed Ayn Rand’s objectivist philosophy in the mainstream of American thought, these essays range over such basic issues as education, morality, censorship, and inflation to prove that philosophy is the fundamental force in all our lives.