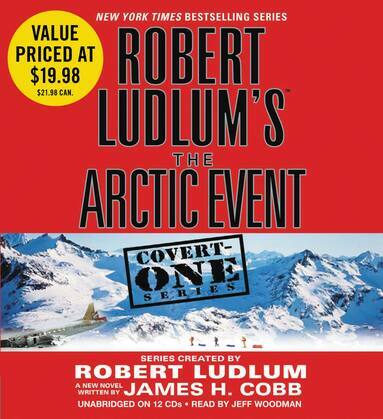 by Robert Ludlum (Author), James H. Cobb (Author), Jeff Woodman (Narrateur)
Excerpt
Fiction Espionage Mystery & detective Suspense Action & adventure Thrillers
warning_amber
One or more licenses for this book have been acquired by your organisation details
On a remote island in the Canadian Arctic, researchers discover the wreckage of a mysterious World War II-era aircraft, a discovery that forces the Russian Federation into a shocking admission. The unmarked plane is a Soviet strategic bomber that disappeared with its crew more than fifty years ago while carrying two metric tons of weaponized anthrax.

Desperate to prevent a political and diplomatic firestorm, the U.S. president dispatches a Covert-One team led by Lieutenant Colonel Jon Smith to the crash site. But others have reached the frigid, windswept island first, including an international arms dealer and his crew of vicious mercenaries. As for the Russians, they are lying: a second, even deadlier secret rests within the hulk of the lost bomber, a secret the Russians are willing to kill to protect. Trapped in a polar wilderness, Smith and his team find themselves fighting a savage war on two front--against an enemy they can see and another hiding within their own ranks.
Protection
DRM Free
Format
Audiobook
Publication date
September 26, 2007
Publisher
Grand Central Publishing
Collection
Covert-One Series
ISBN
9781594837968
Paper ISBN
9780446699075