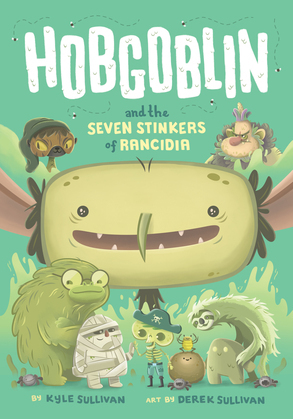 Hobgoblin and the Seven Stinkers of Rancidia

Set in the faraway (and terrible-smelling) land of Rancidia, where it’s good to smell bad and bad to smell good, this uproarious send-up of Snow White follows the adventures of the profoundly stinky Hobgoblin as he flees the jealous wrath of a monstrous, democracy-hating ogre tyrant named Fiddlefart.

Along the way, he joins forces with the Seven Stinkers—an outcast band of foul-smelling creatures (Grody the bog monster, Yucky the skunk ape, Icky the sloth, Musty the mummy, Fusty the moldy pirate skeleton, Poot the sentient dung ball, and Toot, the dung beetle), the adorable barking spiders, and a mysterious squirrel known only as The Huntress.

Hobgoblin and The Seven Stinkers of Rancidia modernizes (and stinks up) the themes of the classic fairy tale to serve as a timely parable of the virtues of democracy and diversity versus the evils of corrupt regimes.