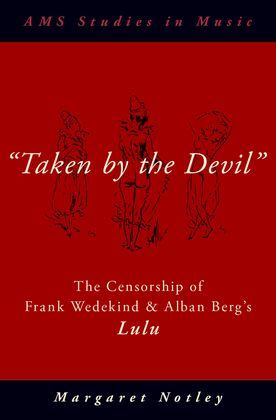 "Taken by the Devil"

Censorship had an extraordinary impact on Alban Berg's opera Lulu, composed by the Austrian during the politically tumultuous years spanning 1929 to 1935. Based on plays by Frank Wedekind that were repeatedly banned from being published and performed from 1894 until the end of World War I, the libretto was in turn censored by Berg himself when he characterized it as a morality play after submitting it to authorities in Nazi Germany in 1934. After Berg died the next year, the third act was censored by his widow, Helene, and his former teacher, Arnold Schoenberg.

In "Taken by the Devil", author Margaret Notley uncovers the unusual and uniquely generative role of censorship throughout the lifecycle of Berg's great opera. Placing the opera and its source material in wider cultural contexts, Notley provides close readings of the opera's libretto and score to reveal techniques employed by the composer and by Wedekind before him in negotiating censorship. She also explores ways in which Berg chose to augment discrepancies between the plays rather than flatten them as in certain performances of the plays during the 1920s, adding further dimensions of interpretation to the work. Elegantly readable, "Taken by the Devil" is one of the most meticulously researched and nuanced studies of Lulu to date, and illuminates the process of politically-driven censorship of theater, music, and the arts during the tumultuous early twentieth century.