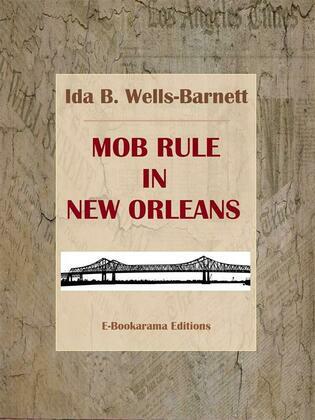 by Ida B. Wells-Barnett (Author)
Buy for €0.49 Excerpt
Nonfiction Juvenile People & places United States African American
warning_amber
One or more licenses for this book have been acquired by your organisation details

Collecting her information from two New Orleans newspapers, Wells-Barnett recounts in graphic detail the events of one particularly violent week in early 20th century New Orleans during which a mob "roamed the streets day and night, searching for colored men and women, whom they beat, shot and killed at will." A worse massacre was avoided, as stated by the author, because of "the determined stand for law and order taken by these great [newspapers] and the courageous action taken by the best citizens of New Orleans, who rallied to the support of the civic authorities." This account serves as chilling documentation of the mindless savagery of an anger- and hate-driven mob.

Born into slavery in Mississippi in 1862, Ida B. Wells-Barnett was an African-American journalist, newspaper editor, suffragist, sociologist, feminist, leader in the Civil Rights Movement, and one of the founders of the National Association for the Advancement of Colored People (NAACP) in 1909.