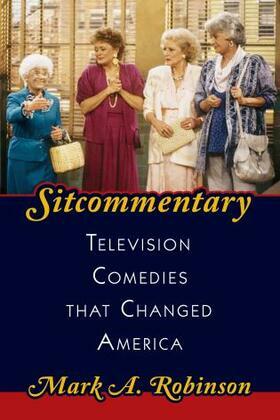 by Mark A. Robinson (Author)
Buy for $36.00 Excerpt
Nonfiction Arts Mass media Television History & criticism Reference
warning_amber
One or more licenses for this book have been acquired by your organisation details

From I Love Lucy to Black-ish, sitcoms have often paved the way for social change.

Television comedy has long been on the frontline in how America evolves on social issues. There is something about comedy that makes difficult issues more palatable—with humor an effective device for presenting ideas that lead to social change. From I Love Lucy which introduced the first television pregnancy to Will & Grace, which normalized gay characters, the situation comedy has challenged the public to revisit social mores and reshape how we think about the world in which we live.

In Sitcommentary: Television Comedies That Changed America, Mark A. Robinson looks at more than three dozen programs that have tackled social issues, from the 1940s to the present. The author examines shows that frequently addressed hot-button topics throughout their runs—such as All in the Family, Maude, and Black-ish—as well as programs with special episodes that grappled with a societal concern like ageism, class, gender, race, or sexual orientation. Among the important sitcoms discussed in this volume are such beloved shows as The Brady Bunch, A Different World, The Facts of Life, The Golden Girls, Good Times, The Jeffersons, The Mary Tyler Moore Show, M*A*S*H, Modern Family, Murphy Brown, One Day at a Time, Roseanne, and Soap. Each has broken down barriers and facilitated discussion, debate, and social evolution in America.

Arranged in chronological order, these TV shows have influenced the masses by tackling tough topics or shining a spotlight on taboo subjects. With discussions of some of the most popular shows of all time, Sitcommentary will appeal to fans of these shows as well as anyone interested in the cultural history of America and American television.