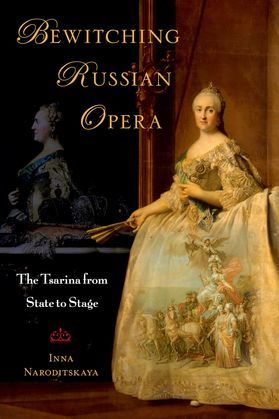 In Bewitching Russian Opera: The Tsarina from State to Stage, author Inna Naroditskaya investigates the musical lives of four female monarchs who ruled Russia for most of the eighteenth century: Catherine I, Anna, Elizabeth, and Catherine the Great. Engaging with ethnomusicological, historical, and philological approaches, her study traces the tsarinas' deeply invested interest in musical drama, as each built theaters, established drama schools, commissioned operas and ballets, and themselves wrote and produced musical plays. Naroditskaya examines the creative output of the tsarinas across the contexts in which they worked and lived, revealing significant connections between their personal creative aspirations and contemporary musical-theatrical practices, and the political and state affairs conducted during their reigns.

Through contemporary performance theory, she demonstrates how the opportunity for role-playing and costume-changing in performative spaces allowed individuals to cross otherwise rigid boundaries of class and gender. A close look at a series of operas and musical theater productions--from Catherine the Great's fairy tale operas to Tchaikovsky's Pique Dame--illuminates the transition of these royal women from powerful political and cultural figures during their own reigns, to a marginalized and unreal Other under the patriarchal dominance of the subsequent period. These tsarinas successfully fostered the concept of a modern nation and collective national identity, only to then have their power and influence undone in Russian cultural consciousness through the fairy-tales operas of the 19th century that positioned tsarinas as "magical" and dangerous figures rightfully displaced and conquered--by triumphant heroes on the stage, and by the new patriarchal rulers in the state. Ultimately, this book demonstrates that the theater served as an experimental space for these imperial women, in which they rehearsed, probed, and formulated gender and class roles, and performed on the musical stage political ambitions and international conquests which they would later enact on the world stage itself.