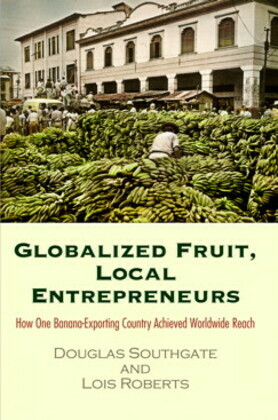 Bananas are the fifth most widely traded farm product. While the results of monopolization in the banana business, such as environmental contamination and the exploitation of labor, are frequently criticized, Globalized Fruit, Local Entrepreneurs demonstrates that the industry is not globally uniform, nor uniformly rotten. Douglas Southgate and Lois Roberts challenge the perception that multinational corporations face no significant competitors in the banana business and argue that Ecuador and Colombia are important sources of competition. Focusing on Ecuador, the world's leading exporter of bananas since the early 1950s, Globalized Fruit, Local Entrepreneurs highlights the factors that led to the development of independent fruit industries, including environmental conditions, governmental policies, and, most significantly, entrepreneurship on the part of local growers and exporters.

Although multinational firms headquartered in the United States have been active in the country, Ecuador has never been a banana republic, dominated economically and politically by a foreign corporation. Instead, Southgate and Roberts show that a competitive market for tropical fruit exists in and around Guayaquil, a port city dedicated to international commerce for centuries. Moreover, that market has consistently rewarded productive entrepreneurship. Drawing on interviews and archival research, Southgate and Roberts investigate leading exporters' and growers' origins, which are more humble than privileged, as well as their paths to success in the banana business. Globalized Fruit, Local Entrepreneurs shows that international marketing by Guayaquil-based merchants has been aggressive and innovative. As a result, Ecuador's tropical fruit sector has expanded more than it would have done had multinational corporate dominance never been challenged.