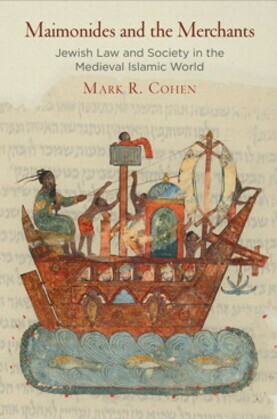 Maimonides and the Merchants

by Mark R. Cohen (Author)
Buy for $69.95 Excerpt
Nonfiction Religion Judaism History Medieval
warning_amber
One or more licenses for this book have been acquired by your organisation details

The advent of Islam in the seventh century brought profound economic changes to the Jews living in the Middle East, and Talmudic law, compiled in and for an agrarian society, was ill equipped to address an increasingly mercantile world. In response, and over the course of the seventh through eleventh centuries, the heads of the Jewish yeshivot of Iraq sought precedence in custom to adapt Jewish law to the new economic and social reality.

In Maimonides and the Merchants, Mark R. Cohen reveals the extent of even further pragmatic revisions to the halakha, or body of Jewish law, introduced by Moses Maimonides in his Mishneh Torah, the comprehensive legal code he compiled in the late twelfth century. While Maimonides insisted that he was merely restating already established legal practice, Cohen uncovers the extensive reformulations that further inscribed commerce into Jewish law. Maimonides revised Talmudic partnership regulations, created a judicial method to enable Jewish courts to enforce forms of commercial agency unknown in the Talmud, and even modified the halakha to accommodate the new use of paper for writing business contracts. Over and again, Cohen demonstrates, the language of Talmudic rulings was altered to provide Jewish merchants arranging commercial collaborations or litigating disputes with alternatives to Islamic law and the Islamic judicial system.

Thanks to the business letters, legal documents, and accounts found in the manuscript stockpile known as the Cairo Geniza, we are able to reconstruct in fine detail Jewish involvement in the marketplace practices that contemporaries called "the custom of the merchants." In Maimonides and the Merchants, Cohen has written a stunning reappraisal of how these same customs inflected Jewish law as it had been passed down through the centuries.