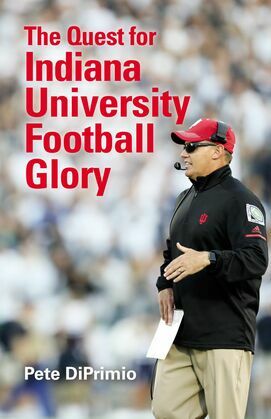 by Pete DiPrimio (Author)
Buy for $9.99 Excerpt
Nonfiction Nature, recreation and sports Sports & recreation Football Football
warning_amber
One or more licenses for this book have been acquired by your organisation details

The beginning of a new era in Indiana University football starts with the arrival of head coach Tom Allen. After revolutionizing IU's defense, Allen has the opportunity to stage a Hoosier comeback. But can Allen make the most of this opportunity? And who are the compelling figures poised to make it happen?

In The Quest for Indiana University Football Glory, veteran sports writer Pete DiPrimio showcases exclusive coverage of the meetings, practices, games, players, coaches, and gatherings that the public rarely sees. He also reveals the surprising story of how Allen, the son of a successful Indiana high school coach, became the head coach after delivering a quality defense—something no Hoosier defensive coordinator has done in a generation. He also shows Allen's connection to IU glory past, from Bill Mallory's record-setting run, to Lee Corso's Holiday Bowl surprise to the Rose Bowl opportunity no one expected. Focused on an in-depth look at the rookie season under Allen, The Quest for Indiana University Football Glory brings readers into the locker room during the rebirth of Hoosier football and highlights the struggles and successes as the coaches and players fight to rebuild the program and reinvent IU football.