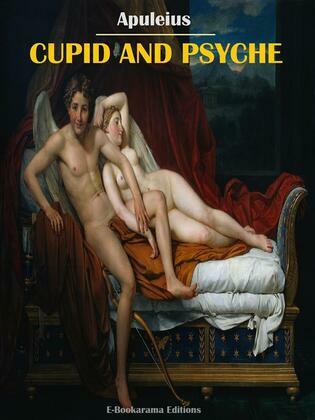 "Cupid and Psyche" first appears in a early, risqué novel by an African Roman of the 2nd century CE. His name was Lucius Apuleius, known as Africanus. His novel is thought to give us inside details of the workings of ancient mystery rites, as well as this charming romantic story of love between a mortal and a god.

The myth of Cupid and Psyche is one of the great love stories of the ancient world and it even has a happy ending. It's also a myth in which a heroine must prove her mettle by coming back from the dead.

Psyche is a stunningly beautiful princess, the youngest and most beautiful of three sisters, so lovely that people begin worshiping her rather than the goddess Venus (Aphrodite in Greek mythology). In jealousy and rage, Venus persuades her son the infant god Cupid to make Psyche fall in love with a monster. Psyche discovers that she is revered as a goddess but never sought for human love. Her father seeks a solution from Apollo, who tells him to expose her on a mountaintop where she will be devoured by a monster.

In obedience, Psyche goes to the mountain, but instead of being devoured she wakes to find herself in a gorgeous palace and ministered to by unseen servants in the daytime, and joined by an unseen bridegroom in the nights. Against her lover's wishes, she invites her plainer sisters to the palace, where their envy is excited, and they convince her that her unseen bridegroom is truly a serpent who she must kill before he eats her.