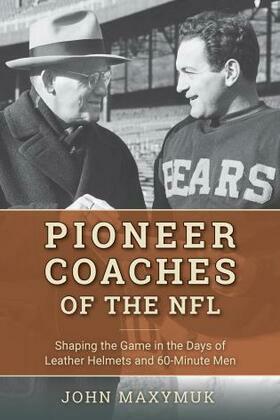 Pioneer Coaches of the NFL

by John Maxymuk (Author)
Buy for $35.00 Excerpt
Nonfiction Nature, recreation and sports Sports & recreation Football Football
warning_amber
One or more licenses for this book have been acquired by your organisation details

In the early days of professional football, coaches were little more than on-field captains who also ran practices—if there was time for practice. The emergence of post-graduate football and the coaching profession from 1920 to 1950 was crucial to the evolution of the game, and both developed and rose in stature over this critical period in the history of football.

In Pioneer Coaches of the NFL: Shaping the Game in the Days of Leather Helmets and 60-Minute Men, John Maxymuk profiles some of the most innovative coaches from the early days of the NFL, including Guy Chamberlin, Curly Lambeau, George Halas, Potsy Clark, and Clark Shaughnessy. Along with biographical sketches and career details, the profiles examine the coaches’ strategic approaches, their impact on the history of the game, and the advancement of their roles both on and off the field. It was this group of coaches who initially devised the basic repertoire of plays and alignments, as well as passing routes, blocking schemes, shifts, and substitution patterns. These men morphed defensive alignments, introduced the four-man secondary, conceived zone and man-to-man coverage mixes, and concocted linebacker and safety blitzing.

Pioneer Coaches of the NFL details how coaches from the first three decades of the NFL established many of the procedures, conventions, and strategies that modern football coaches still use today. These innovators presented those that followed them a rich palate with which to imagine and create an even greater game.