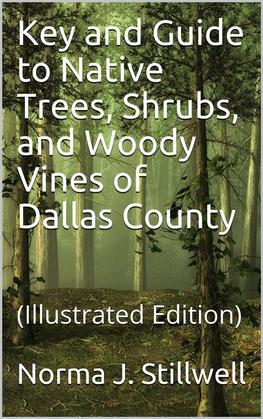 Key and Guide to Native Trees, Shrubs, and Woody Vines of Dallas County

by Norma J. Stillwell (Author)
Buy for €3.99 Excerpt
Nonfiction Nature, recreation and sports Nature Trees Juvenile Nature Trees & forests
warning_amber
One or more licenses for this book have been acquired by your organisation details

This simple key and guide to the woody plants—trees, shrubs and woody vines—which grow naturally in Dallas County, Texas, has been prepared to help beginners of any age in getting better acquainted with these leafy neighbors and friends. Woody plants offer one of the best places to begin a study of nature: first because there are but few kinds to learn in comparison with many other living forms—about 90 of these plants against estimated numbers for the county of about 300 birds, 500 to 1000 other flowering plants and over 25,000 insects; second, woody plants remain in one place, freely available for observation at any hour or season and year after year—if they escape human interference. And what more helpful link toward acquaintance with other interesting forms of natural life can be found than an intimate friendship with their mutual friends, the trees!

The distinctions between trees and shrubs or between shrubs and woody vines are often purely arbitrary, depending in part on age. A plant which grows at least twenty feet tall and usually (not always) has just one woody, self-supporting stem at the ground is considered a tree. A plant which rarely grows taller than twenty feet, in a given region, and usually has more than one woody stem rising from the ground is considered a shrub. The separation of herbs from woody plants divides those plants which usually die down to the ground each winter from those having woody stems which persist above ground year after year. Some ninety different woody plants are distinguished from one another and briefly described in this key and guide. Each description represents a single species with the exception of the cactus, yucca, red oaks and red haws; the differences between the various species of these plants are too complex for this brief manual.

Scientific names are included here, not with any thought that they should be memorized or that they need be used in ordinary conversation, but to avoid the possibility of misunderstandings such as often arise from some common names which are used by different persons to designate different plants. Many plants have more than one common name and often one common name is used for two or more quite unlike plants. Common names listed first are the ones considered more suitable.

The first part of the scientific name represents the genus (plural, genera), a degree of relationship or grouping smaller than the family but more inclusive than the species. The second name represents the species or specific kind of plant; species are occasionally divided into varieties (var.). The abbreviation following the scientific name stands for the name of the botanist who first described or named the plant, scientifically. L. stands for Linnaeus, “the father of modern botany”, who first used this double-name (binomial) system of scientific classification.

More extended descriptions and further information about these plants may be found in some of the reference books listed in the back of this booklet; many, if not all of them, are available in the Dallas Public Library. Only the more necessary technical words have been used and these are defined or illustrated herein. Although this booklet endeavors to include all the woody plants growing naturally in Dallas County, no doubt omissions and errors will be found and the author will be glad to be informed of them.